Psoriasis has been known to mankind for a long time. For the first time it is mentioned in the Bible, but until now there is no complete understanding of the causes of these rashes. Scientists are trying to link this disease with complex immune and endocrine system disorders and also consider it hereditary. But absolute success was achieved only in one thing - there was a firm belief that this disease was not a manifestation of infection of the body. That is, psoriasis is not contagious.

Another name for this disease is scaly lichen. It mainly affects the scalp, the outer side of the elbows and knees, on which dark pink scaly rashes appear. Of these, psoriatic plaques soon form. They have a pronounced white growth, consisting of dense scales, which cause cracking of the affected areas, accompanied by itching and the formation of oozing wounds. Despite the fact that the causes of rashes are unclear, the mechanism of their appearance is well understood. With the onset of psoriatic scales, the life cycle of epidermal cells in these and adjacent areas is drastically reduced to 4-5 days, in contrast to the normal 28-30 days.

Since its etiology is unclear, but there is convincing evidence that the disease is systemic, affecting not only the skin, but also internal organs, leads to the following disorders in the body:

It is possible to list for a long time the complications that psoriasis leads to, but from this short list it becomes clear that the disease is serious and dangerous. The situation is aggravated by the fact that currently therapeutic agents are only able to control and suppress the course of the disease, but not to cure it. Psoriasis is permanent but can be accompanied by long periods of remission.

What can cause the disease to exacerbate or cause it to relapse?

Despite the fact that the manifestations of psoriasis are not systematic, there are factors that can provoke the appearance of rashes in various areas of the skin. Therefore, patients should be aware of them and, if possible, pay attention to their influence. The following causes aggravate the course of the disease:

Ultraviolet for psoriasis: benefit or harm 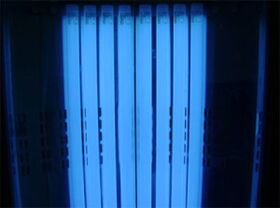 Psoriasis and solarium: benefit or harm?

The main difference between tanning in a solarium and in the sun is that in artificial conditions, the production of melanin occurs without exposure to dangerous ultraviolet radiation, especially UV-C rays, which are harmful to the skin during tanning. Solariums do not use this type of radiation. However, in the initial stage of the manifestation of the disease, artificial tan helps to cushion the development of rashes. Therefore, doctors do not recommend the treatment of psoriasis with a solarium, but they do not find contraindications to its use as a therapeutic agent.

The effect of radiation in a solarium on the skin

Therefore, a visit to the solarium cannot have a negative impact on the course of the disease and can, to some extent, cushion it. But why then are there people to whom artificial tanning brings only harm? The answer is that the combination and power of the lamps in solariums is different. When choosing a salon, you should ask about their spectral composition, one of the most important characteristics. The lamps are designed with various combinations of UV-A and UV-B radiation. For example, those with UV-B 1% or less are classic and those with UV-B over 1% are professional. 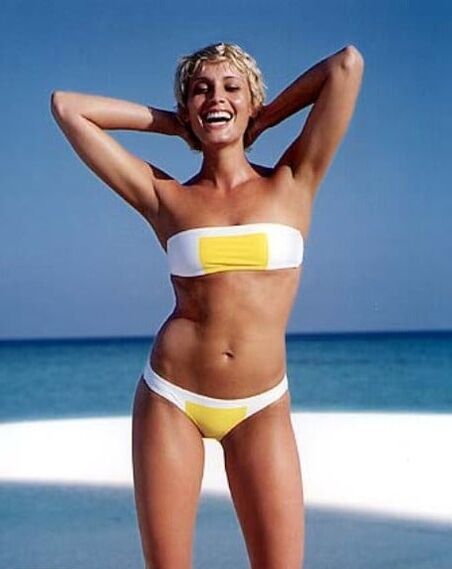 It is also important to have a reflector. If it is not present, the radiation affects the weakened skin and, if it is present, it becomes concentrated. The reflector can be placed both in the lamp itself and outside. Regardless of whether or not there is a reflective layer in the lighting device, you can tell if you look at the lamp through the light. If there is, the efficiency of its radiation is 10% higher than the conventional one.

Therefore, in order for the treatment of psoriasis with solarium to be beneficial and not harmful, it is necessary to choose the right tanning studio with the right combination of UV radiation. Excessive is always harmful to the skin and leads to the formation of tumors and other problems with it. The relationship between UV-A and UV-B rays is very important for patients with psoriasis. The best option here would be the following combination: UV-B waves with a length of 311 nm. and UV-A waves 300-400 nm. This ultraviolet radiation ratio has a Daavlin photo booth, which provides light of a narrow 311 nm nbUVB spectrum. Those who visit it notice a marked improvement in their condition. The course of therapy is 20-30 sessions.

Therefore, the question: does a solarium help with psoriasis can be answered with confidence - yes. But it is important not to recklessly choose a studio near the place of residence, but to be interested in the spectral characteristics of the lamps emitting in it. It is important to know that a vertical tanning method is preferable to a horizontal one. The time spent in the cabin must not exceed 5-6 minutes and the sessions must be alternated on alternate days. UV rays in moderate doses help strengthen the immune system. What is extremely necessary for a patient with psoriasis.